[do action=”green-text”]Rick Rutherford’s Country is based at Lawson in the heart of the NSW Blue Mountains.[/do]

The gallery is located in the heritage precinct of Lawson – the original Blue Mountains settlement. The wonderful old building was created when two old cottages were transported to the site in 1904. It was the private residence of the folks who owned the neighbouring general store – the very first on the mountain. 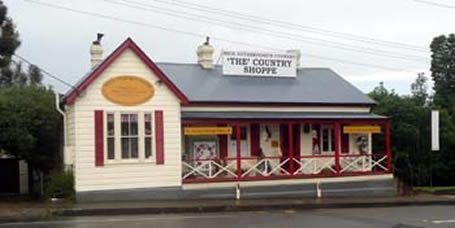 (taken from an article in ‘Blue Mountains Life’ magazine)

In this age of ‘knock down and rebuild’ and a modern perception held by many that ‘new is best’, there is a danger that important elements of our heritage will be swept away. But thankfully there are many who have a passion for the past and a desire to see it not just preserved but play an important part within the here-and-now.

One such person is Australian country author Rick Rutherford who has recently completed the restoration of a graceful NSW Blue Mountains property, not only breathing new life into the building but also creating a unique country gallery in the process which is now open to the public to inspect firsthand. 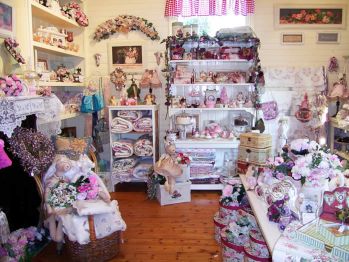 The building in question is located at Badgery Crescent, just off the Great Western Highway, at Lawson. Accessed via a bridge which crosses the railway line, it sits next to an antique shop and railway museum and is part of an exclusive heritage precinct which has now been revitalised as a consequence of all the love and attention lavished on the grand old ‘dame’.

Local folklore tells that the building was once known as ‘Cholderton’ and is believed to have been established around 1904 when two smaller houses were transported to the site and joined together. At one point in its past it was flats and may have even been a general store. In the early 1990s, Council granted permission for the building to operate as a gallery and tearooms, and there was even a restaurant – popular with locals and visitors alike – on the site. Most recently the facility operated as a Christmas shop, but over time continued to deteriorate and fall into disrepair. It was in desperate need of love and care.

With the dream to see the final evolution of his magazine from print, to website to real-time store where people could come and witness firsthand the various interpretations of country decorating which he has written about for nearly 15 years, local mountain’s identity Rick Rutherford could see that his vision, and the appointments of the building went hand in hand. 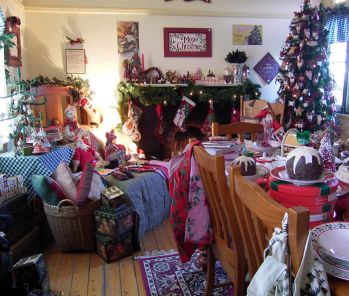 Rick established Australian Country Collections back in the early 1990s and steered it for over 11 years, making it the nation’s most popular bi-monthly country interiors title. When he left the publishing house behind the magazine to produce his own national bimonthly title – Rick Rutherford’s Country in collaboration with Sydney-based Express Publications, he still harboured the dream to one day be able to present to the public – within the context of a heritage-style facility – the full gamut of country looks for which he has such a passion. After a short time, he made the decision to take the title into ‘cyberspace’, establishing Australia’s first online country magazine, with Readers Forum and online shop … a move which has proved to be highly successful with seven times the traffic originally anticipated.

“But all the while I have still hankered to one day have a country gallery where I could fill each of its rooms with all the unique wares that are essential to creating a world of country looks. And more than this, I wanted to create a special place where people would be drawn to come and find peace, inspiration and a sense of love” states Rick.

The journey – somewhat rocky and time consuming in the extreme – finally led to ‘Cholderton’. And so the final phase of the evolution of Rick Rutherford’s Country has been ultimately realised within the hallowed halls and beautiful rooms of this grand mountains lady. Walls have been replaced, electricals repaired, plumbing fixed, complete painting inside and out and countless repairs and restorations have been done to breathe new life back into the building. It has even been renamed ‘Badger House’ to reflect its old world grace. 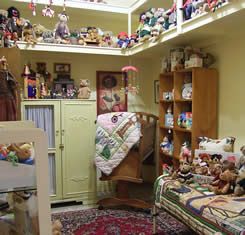 Within its many rooms, a world of country looks spanning the many traditions and interpretations of what country is all about has been created. There’s a gorgeous Folk room filled with braided rugs (the gallery houses the largest collection of beautiful imported rugs in the mountains) and traditional folk wares; and a romantic Victorian room bursting with everything pretty and vintage. There’s a Retro Country room which transports one back to the 1930s and 40s; a Children’s room complete with crib and lots of beautiful bears. There’s a ‘Coastal Corner’ with loads of beach-inspired treasures; Cottage room where the sun streams in on lots of blue and white china on whitewashed dressers; a classic English room complete with leather wingback and vintage china; and even a Christmas room which is open all year round and is filled to overflowing with so many festive treasures not to be found anywhere else. 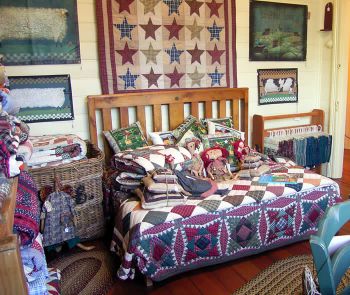 “It’s just so wonderful to finally be able to present to the public – real-time and within the midst of such a beautiful heritage setting – glimpses of the country decorating styles I have written about over so many years. And it’s also great to be able to meet first-hand so many of the fabulous people who have followed my work for so long … not to mention having the opportunity to make new friends as the gallery draws familiar and new acquaintances alike. Equally it’s a pleasure to know that ‘Badger House’ – a grand old lady of the mountains – is dressed to the nines once more” adds Rick.

[do action=”red-text”]From Sydney, turn right off the Great Western Highway, across the railway line, after you see the heritage Baptist church on the left. The turn off is across the San Jose Bridge, at the lights BEFORE you reach the Lawson township which hugs the lefthand side of the highway.[/do]

[do action=”red-text”]From Lithgow and Bathurst, pass through the Lawson township and turn immediately left at the bridge just after the Lawson Station on the left hand side of the road.[/do]