In reality, serendipity accounts for one percent
of the blessings we receive in life, work and love.
The other 99 percent is due to our efforts.
(Peter McWilliams 1950 – 2000)

By her own admission, Kerri Cook had an inside advantage! Being in the business of managing properties, she has the privilege of seeing a host of houses every day. And yet, despite the huge array of homes she views, when a particular cottage came onto the market in southern South Australia about two years ago, she admits that it stole her heart. And so she and husband Malcolm made the decision to buy the residence, in so doing setting out on a mission of restoration and repair which ultimately took the couple well over 10 solid months.

Kerri tells that when family and friends first saw the house in its original state, they all thought she and Malcolm had lost their senses! But the couple could see beyond the fibro façade and the less-than pristine interior. They instinctively knew that, with a lot of hard work and much effort, they could turn it into a wonderfully cosy, charming place to live. And so the hard work began!

Despite the fact that the house is just over 45 years old, it presents as being a Federation cottage, especially now that the Cooks have worked their magic. On the outside they have clad the entire building, finishing it in a heritage cream. They’ve replaced windows and doors, and added delightful awnings above the windows to match the galvanised grey tin roof which had been completed by the previous owners. Over an earlier slate verandah they have added timber decking and finished it with handsome balustrading and fretwork above. 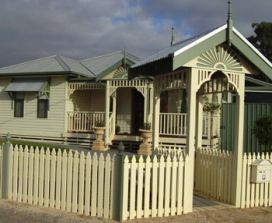 To complement the verandah and to achieve a quintessential country feel, Kerri and Malcolm then added a delightful picket fence – painted the same colour as the exterior of the house – and an impressive lychgate. Both the top of the portico leading onto the verandah and the peak on the lychgate were then crowned with finials and trimmed with fretwork – done by a specialist in Adelaide – depicting a rising sun. As Kerri explains “the motif not only helps to bestow a Federation feel on the house, it is also a reflection of the fact that the home is our little ray of sunshine.” To complement the fresh cream of the exterior woodwork, all trimmings feature traditional Colorbond ‘Mist Green’.

Other exterior modifications which have helped to transform the home so dramatically include western red cedar French doors and custom-made farmyard screen; dark grey pavers used to create both a driveway and path to the rear of the house; and the creation of a circular lavender garden – with weeping mulberry in the middle – in the front yard. At the rear, the major modification has been the creation of an outdoor pergola with gabled entertaining area off a rear deck which leads from the dining room. This is the focal point for most of the couple’s summer living, the ‘everyday is a holiday’ feel enhanced by the fact that the beach is just a short walk away.

Inside, the couple’s restoration efforts have been just as extensive – from moving walls and re-cladding all the gyprock to polishing the floors throughout. Both the kitchen and bathroom have been completely overhauled, the experience of renovating the cookroom alone having been a traumatic undertaking. “We removed the original, dated kitchen and for four months had nowhere to cook or eat. The bathroom renovation was equally memorable as we had to move walls to make the original space larger. As the work progressed winter set in. There were no skirting boards so you could literally see outside from indoors. We huddled around a kerosene heater at night, often wondering if it would all ever be finished” Kerri recalls. 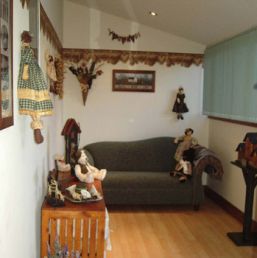 But ultimately, rooms began to take shape. Two bedrooms were completely renovated and painted out – one for Kerri and Malcolm and the other for their two grandchildren. A third bedroom was surrendered to create the dining room off the kitchen, the overall space being the main living area in collaboration with the lounge room and a skillion sunroom which, in its previous form, was an entrance hallway. As Malcolm tells “the renovations allowed us to alter the access by installing a new entrance portico and doors which access the lounge room at the front of the house. From here a passageway leads to the guest bedroom and bathroom and then, further on, to the kitchen and dining area.

“The leadlight windows from the original entrance were recycled for the new bathroom and laundry. The re-outfitting of the skillion also entailed the installation of a suspended timber floor over the original concrete slab underneath” he adds. Finishing touches include a wallpaper border depicting hearts and baskets hanging from a Shaker peg rail, and a robust lounge which sports a chaise-style back and is upholstered in a sage green cut velvet. 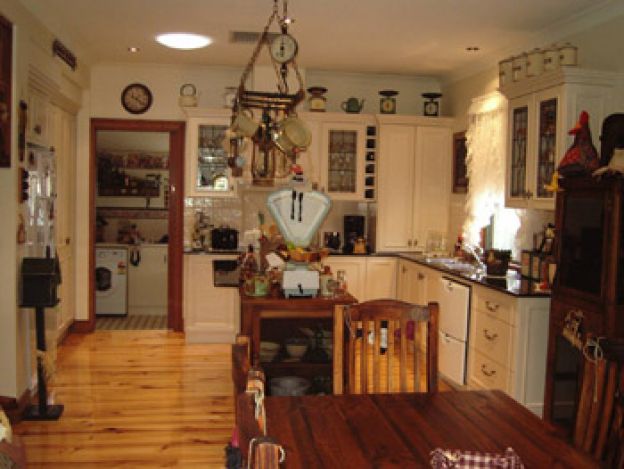 Now completely overhauled, the new kitchen is very much the heart of the Cook’s home. Accessed at the end of the entrance passage (with overhead fanlight which was made by the same Adelaide craftsman who fashioned the fanlights on the portico and lychgate outside), the kitchen is a fresh and welcoming space, with crisp off-white cabinetry (dressed with a proprietary two-pack finish) and black granite benchtops. Custom-made leadlight doors used for the overhead cupboards were designed by Kerri and Malcolm; special provision was made for the integration of the refrigerator and microwave as well as the dishwasher. A wall oven is complemented by hotplates integrated into the benchtops.

Vanilla ceramic tiles have been used for the smart, crisp splashback while an island in the middle of the room provides a boon not only for food preparation but also for essential cookroom storage. Views to the back decking from the window above the sink and easy access to the outdoor entertaining area via the adjoining dining area – which is furnished with a robust hardwood dining setting – further help to emphasise the bright, airy feel of the space. 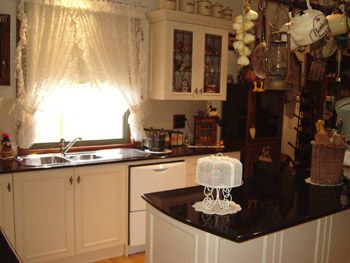 To further help create the sense of freshness and light throughout the entire interior, the Cooks have painted all walls and ceilings with Solver’s ‘Cream Stone’, using furnishings, accessories and imported American wallpaper borders to achieve the essential warmth and character which is so much a part of the invitation and charm of the restored cottage. As Kerri maintains “the house is just too small to indulge in deep wall colours and dramatic window effects. By using a cream paint throughout all the rooms, and even applying it to the ceilings, we’ve been able to achieve an illusion of space and light.”

The other part of the house which has been so dramatically overhauled is the bathroom. Once walls had been moved to create more space, a tessellated floor in cream and heritage green was laid. Vanilla brick tiles used for the walls are topped with a rose-embossed frieze and capping tile, a key focal point of the room being the lovely old leadlight window which came from the former entrance. A modern-made clawfoot slipper bath is ever-inviting for luxuriating soak-ups.

The scheme has been repeated in the nearby laundry where inbuilt laminated cabinetry serves to help make the hardworking room supremely efficient and practical. An imported wallpaper frieze sets the country mood and inspires a collection of nostalgic-style collectables.

Slumber time finds the Cooks in their delightful master bedroom, Kerri stating that it is still a work in progress. The space is elegant in its simplicity, with gold damask drapes at the windows and cream lace curtains – wonderful for day-time privacy – behind. The crowning feature of the room is a mahogany bedstead with inset leadlight panel in the headboard and inbuilt pew at the foot. Kerri has dressed the bed in a crisp broderie anglaise bedset and a favourite bear decked out in lace.

The guest room is a little more elaborately adorned, Kerri telling that here she has let childhood fancies take flight. “The room is devoted to what I dreamt of as being the ideal bedroom back when I was a little girl. And considering it is where our three-year-old granddaughter Aisha sleeps when she comes to stay, I officially have an excuse for all its pretty dolls and teddies. It’s the perfect young lady’s boudoir … though I’m not sure what I’m going to do when our grandson Zane, who is just one, is old enough to stay over and demands all the dolls and pretty things to be gone” Kerri jokes.

Meanwhile, until that day comes, the hardwood bed in the room is topped with a broderie anglaise doona cover and shams, and dusky rose quilted coverlet. A Federation dressing table and matching linen press – now converted to a wardrobe – which originally belonged to Kerri’s grandmother also furnish the room.

“Standing back and surveying the fruits of nearly a year’s hard labour, I have to admit that the effort has been well worth it. I think we have done everything we can possibly do to transform the old cottage and, in the process, we’ve put our heart and soul into the place” states Kerri. “It’s amazing to think that in just over a year it has really come to feel such a part of us. With its quaint character indoors and its al fresco dining and entertaining outdoors, it’s not just a house, it’s a lifestyle. It’s a home with a heart and a fitting reflection of who we are … not to mention being the outcome of a whole lot of effort!” she adds.

Thinking it needs to be said! ... See MoreSee Less

A garden is a living thing ... just like a home. I

It's not what others have done to you that defines

There comes a point in life where we have to accep

It is when we embrace that which defies logic tha

Integrity ... it's an attribute to observed and cu

The greatest joy ... when kindred souls that I lov

Life is so much more rewarding and creative when w

The challenge is not to deny or ignore how we feel

We are each called to address who we are ... irres

"You can't go back and change the beginning, but y